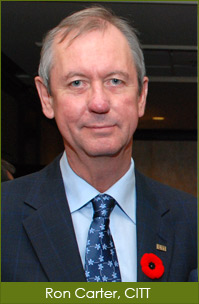 When CITT Chair of the Board Warren Sarafinchan, CITT, broke the news that Ron Carter had been selected as the recipient of the 2012 Award of Excellence, few people were surprised. Ron has been a supply chain “Jedi Master” for many years. And for much of that time, the supply chain challenges he faces every day are as unpredictable as the weather in the North Atlantic. But it was easy to predict that Ron would reel in this award sooner or later.

The CITT Award of Excellence is presented annually during CITT's Reposition conference to the member who best exemplifies a strong commitment to the logistics profession and to CITT. Nominees are selected by their peers. All past recipients of this esteemed honour all have one thing in common. They were all the “best of the best.”

Ron is well-known in logistics circles throughout Atlantic Canada. For the past 17 years, he has been the Director of Logistics at Clearwater Seafoods, a vertically integrated seafood company that is a global leader in the harvesting, processing and distribution of shellfish based in Bedford, Nova Scotia. He leads a team responsible for arranging and managing the movement of frozen and live products 24/7 through the Clearwater value chain–from the time when vessels dock in Canada and Argentina–to delivery across the globe by air, ocean and truck. He also monitors all imports and exports to ensure compliance.

He was particularly proud to earn the Award of Excellence because it reflects the work of an entire career, and not just a few accomplishments here and there.

"It is a great honour to receive the recognition of my peers and be selected to be the recipient of the 2012 CITT Award of Excellence and to join the ranks of a list of very impressive previous winners," said Ron. "The award is especially meaningful to me because it speaks not just to a single achievement, but to an accumulation of achievements gathered over time."

People who have worked with Ron can attest to his guiding influence. In an era where mentors are in short supply, Ron always found the time to help someone just starting out. Patrick Bohan, CITT, is the Manager of Business Development at the Halifax Port Authority. He speaks first-hand about Ron's influence on others, and on his ability to manage a supply chain so vulnerable to the elements.

"Ron has coached and groomed young logistics professionals at Clearwater. And he does this while running one of the most challenging supply chains one can imagine."

Ron unselfishly credits CITT for helping him learn along the way, and for providing him with a real sense of community.

"For over 20 years, CITT has been an important part of my business life and of my personal life. I have learned so much from the wide variety of roles I have been involved in, and have made so many wonderful friends along the way."

Since earning his designation from CITT in 1990, Ron has remained an active participant within CITT. Though no longer on the CITT Board, he still attends the occasional meeting to add a voice of experience. He is currently an advisor for the Nova Scotia Area Council, and a past Chair. He held the position of CITT Chair of the Board in 2000, and served as Vice Chair, Rules, from 1996-97 and Vice Chair, Administration, in 1998. Prior to relocating to Halifax in 1994, he served as the Toronto Area Council Chair.